As I walk down the street, I’m greeted with a big smile from Vince Vitali. Starbucks in hand and a quick step, Vince is obviously very excited to get working on the last few details of the  building he is renovating next to his family’s restaurant.  Today he’s here before work to meet with the electricians and deliver some building materials.   Vince’s new place “Gianni’s Italian Market” is slated to open Oct. 17th for the 1st ever Imagine Hillsboro Harvest market so he’s been working day and night to renovate the space, choose food items to sell and make, design labels for their own line of products, and make time for his wife Jennifer, son Tyson (5) and Giovanni (3months).

Vince’s family has a long tradition of food and a passion for quality. Vince’s Grandfather Vincenzo Vitale had a produce stand in Italy in the 60’s. His Grandpa on his moms side had an olive farm, and his father owns two restaurants that Vince helps run with his mother Caterina, brother Gian Luca, and sister Rose.

“The Hill”, a famous Italian Neighborhood in St. Louis, was a big time place in the 70’s.  That was where Vince’s father Gianni headed, working his way up from dish boy to head chef at Dominic’s. He met the likes of Chuck Berry and Tina Turner and in 87 opened his first restaurant called Gino’s. Vince was 3… Fast forward a few years and Vince is opening a place of his own. 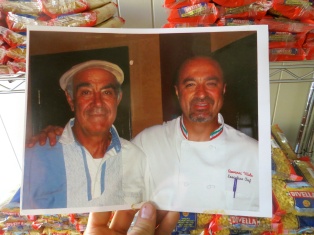 Why Hillsboro?- A few years back before the Vitali’s lived in Hillsboro Vince would go on day long scouting trips with his father and grandfather driving around central Illinois. Vince’s job was to Google towns on his phone that didn’t have Italian restaurants. When they came to Hillsboro, Vincenzo said “I have a good feeling, This is the town!” He fell in love with the court house and the square because it reminded him of his home town in Cinisi, Sicily. 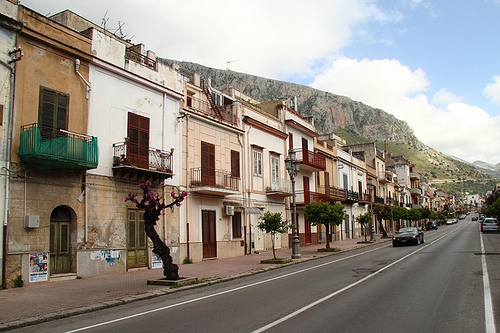 Family is traditionally very important to Italians and the Vitali’s are no different.  Vince told me about their family’s epic sounding weekly “sunday dinners”.

Shrimp, swordfish, lobster, scallops, mushrooms, parsley are all part of the norm. Oh yeah, and they speak Italian at home. Coooool.

“Italians in Italy are all broke, but it’s because they love good food so much!” “I know!”-I reply excitedly. We are on the same wavelength… “Apparently when Vince’s Grandfather was having health problems he would jokingly say “Just kill me now if I can’t eat good food anymore!”

Vince telling me stories about all the famous sports stars that have visited his family’s restaurants over the years.

Gianni’s grand opening will be at-

See you there! -Small Town Cool